We have a debt and revenue problem.  Only republican politicians receiving enormous sums from private donors are immune to the truth:  that the Bush tax cuts are killing our economy, values, unity and future. 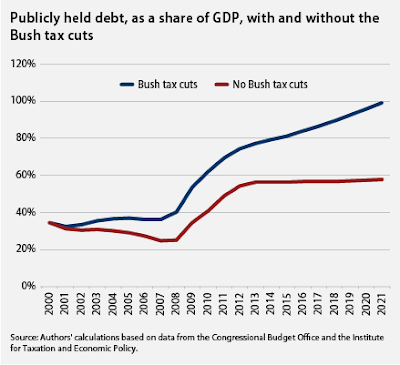 "Bear in mind that President Bush inherited perhaps the strongest federal balance sheet in postwar history. There were record-high surpluses, debt was at around 30 percent of GDP and falling, and the Congressional Budget Office projected that the federal government would be debt free by 2009. The country was in great fiscal shape to deal with any crises or emergencies coming down the road, and it was even ready to deal with the coming retirement of the baby boom generation.
But rather than follow President Bill Clinton’s successful lead, President Bush handed out gigantic tax cuts, with people at the top of the income ladder getting the biggest breaks. Those “supply-side” tax cuts were a complete failure as economic policy, and now, instead of being debt free and well prepared to care for an aging population, our debt-to-GDP ratio is almost 70 percent. If those tax cuts are extended—instead of being allowed to expire on schedule at the end of 2012—it will approach 100 percent by 2021."

Posted by stephen sarbiewski at 9:43 PM