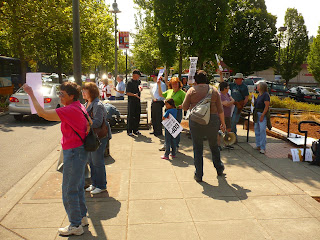 I was fortunate to attend a protest in front of Rep. Reichert's (R-WA) office on Mercer Island, Wa. today.  It was great to stand in a crowd of like minded progressive activists.  We received a great response from the many passing vehicles.  Almost everyone waved and many honked their support.


It was a beautiful day, warm and sunny.  I overheard one person saying they had counted 43 people at the event.  Where are the jobs?  Jobs not cuts, were the two most popular signs.  Next Thursday, 10AM another protest is planned for the same location.

We want good jobs and we want them now by Nate Jackson
Posted by stephen sarbiewski at 9:19 PM