"We’re right smack dab in the middle of construction season. There are 70,000 workers off job sites today because Congress can’t get their act together and can’t compromise."

The lost airline ticket tax is costing the US 200 million a week, 4,000 FAA employees are furloughed and 200 stop work orders on construction projects have been issued.  What?  Why is congress refusing to authorize spending for the FAA?  The republican majority has been accused of union-busting and hostage taking (again).  Here's the facts, you decide if its union busting.  Unions have been losing membership coinciding with the fall in middle class income(see graph below).  A close partnership of republicans and business leaders have made it tough on unions.  For years on the occasion when workers would vote to become unionized, there was an unusual rule.  If you didn't vote in the election, it was counted as a No vote.  That's right, if you didn't vote, they counted your vote as a NO.  By this standard no member of congress, even in the most partisan district would be elected to congress.  But this was the standard to form a union in the airline and railroad industries.  Last year the National Mediation Board, which oversees these elections overturned the rule.  Enter the republicans, they will not renew funding for the FAA unless this rule is restored.  To summarize the republicans are refusing funding for the FAA until the old voting rule is reinstated, namely the republicans want all non-votes in union votes to count as a NO vote.

CAVUTO: And you were also against the provisions in there that would make it easier... for FAA workers to unionize. And that was a point of contention and one of the reasons the Senate said, we just can't take up this measure that objects to that. So where do we stand?

CANTOR: Well, you know, that disagreement is really under the underlying bill. This was the extension that that really is not a part of this discussion. The issue about organization for labor has to do with being fair to both sides. And if you're going to be fair to both sides, you ought to give both the employees as well as the employers an equal opportunity to make the case.

I'll bet Mr. Cantor wouldn't think it was "fair" to apply all non votes=NO votes to his election to congress. 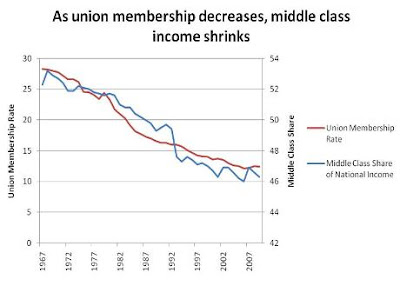 
From Wisconsin to Ohio to Maine, we have seen how Republican politicians are attempting to destroy a century of hard-fought labor protections.  This bill represents more of the same. The bill would reverse a National Mediation Board rule that allows a majority of those voting in aviation and rail union elections to decide the outcome. Instead, Tea Party extremists want to count workers who chose not to vote as automatic “no’s” against the union.
I wonder if my friends on the other side of the aisle would be willing to use that same standard in congressional elections? I wonder if they’d agree that every registered voter who didn’t vote—for whatever reason—last November would automatically be counted as a “no” vote against them. I doubt it.
Because in the 2010 midterm elections, 40.9 percent of eligible voters cast ballots nationwide.
Under the standard in this bill, not a single current Member of Congress would have won election last year. Not one.

Posted by stephen sarbiewski at 10:47 PM