:"I encourage Oklahomans of all faiths to join me this Sunday in offering their prayers for rain.  For the safety of our firefighters and our communities and the well-being of our crops and livestock, this state needs the current drought to come to an end. The power of prayer is a wonderful thing, and I would ask every Oklahoman to look to a greater power this weekend and ask for rain." 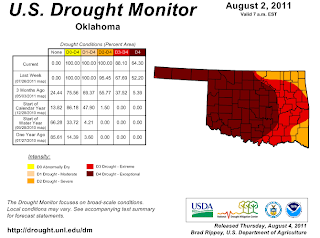 The drought is much worse in Oklahoma.  If prayers worked this drought would not have gotten much worse.   It's amazing to me that over the centuries there has been absolutely no reliable, verifiable evidence for deities, but that doesn't seem to have slowed down the masses of blind believers.  It's ironic that the same people who reject all the strong verifiable evidence for climate change, seem to accept the existence of deities without any evidence at all.  Right after the governor posted her prayer proclamation, Abbie Smith,  a graduate student in Oklahoma wrote a prophetic post:  Mary Fallin you fool!, you've doomed us all on her blog, ERV.

Posted by stephen sarbiewski at 4:46 PM