Republicans have refused to write a single jobs bill in the 9 months they have held a majority in congress.  Instead they have focused on cuts which have exacerbated unemployment.  The modest gains in private sector employment during the recovery have been erased by the job losses in federal, state and city workers.  Last month for example we grew just enough jobs to cover the loss of government jobs leaving the US with a zero change in employment. 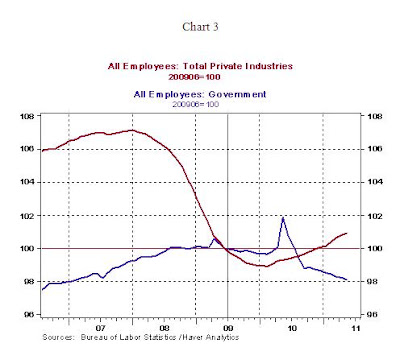 Interest rates are at or below historic lows now, we have millions of unemployed or underemployed Americans and a fading infrastructure.  Those 3  variables should intersect into a massive infrastructure spending bill.  The only problem with that grand solution is its interference with republicans stated number one priority: that President Obama is a one term president.   Across the country during the congressional recess citizens spoke out against the republicans wrong headed focus on the debt and their failure to raise revenues.  Many republican congressman responded to these unhappy citizens by spending the recess hiding from constituents.  Some congressman demanded citizens pay to speak with them,  charging admission to their venues.  In my state of Washington, Congressman Reichert held two public events, one cost 35 dollars for entrance the other $125.  There were three large demonstrations in front of Reicherts Mercer Island office, he didn't bother to come out and listen to the folks there either.  Republicans are your representative, only if your in the top 1% income group.
Get your message out to other citizens that we need Jobs Not Cuts with this free bumper sticker from Rebuild the Dream.

Posted by stephen sarbiewski at 5:47 PM