USA Number One in Teen Pregnancy


As difficult as it may be to believe, the United States has the highest rate in the industrialized Western world of pregnancy and births for girls aged 15-19.  Nearly one-third of all U.S. girls will get pregnant during their teen years, resulting in 750,000 teenage pregnancies per year.  More than two-thirds of these teens will not graduate from high school, resulting in billions of dollars spent on caring for these girls and their children.  In contrast, the amount spent on prevention and education programs is currently in the millions of dollars.
Of even greater concern is the spread of sexually transmitted disease in those aged 15 to 24.  Approximately half of all new HIV infections occur in this age group.  The most effective way of reducing these alarming statistics is education.  We must provide mandatory and ongoing education and support for teens if we are to reverse this trend. 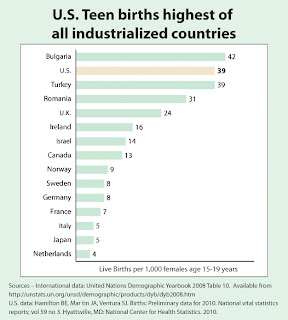 Our educational system is criminally negligent in failing to educate our youths about sexual reproduction, pregnancy, birth control and STD's.  One in four youths in our country receive ONLY "abstinence only" sex education which is no sex education at all.  There are 4 billion people on this planet attesting to the very strong evolutionary and biological drives to reproduce.  The urge to have sex is very strong and telling our youths to just say NO is not only inadequate, its foolish and even hypocritical.   Look at now resigned in disgrace senator John Ensign who while still married, carried on an affair with a member of his staff, that also happened to be his best friends wife.  Look at senator David Vitter (R-LA) who while married solicited prostitutes while in Washington D.C.  Not a month goes by without a new major sex scandal somewhere in our country.  When senators and presidents can't control their sexual urges, can we reasonably expect immature young people to just say no?  There is no excuse for not fully educating our young people about their sexual drives, when the failure to do so, results in debilitating STD's and early pregnancies that create traumatic strains on individuals, families and our entire society.  As a society, we cannot let religious conservatives apply their dark ages mentality to our modern educational system.  The earth is not flat, and young people WILL have sex, it's up to us, to make sure they understand how to protect themselves from STD's, and unwanted pregnancies.

Target:  U.S. Secretary of Education Arne Duncan and U.S. Secretary of Health and Human Welfare Kathleen Sebelius
Goal:  Provide mandatory education for teens regarding sexually transmitted diseases and pregnancy. Create support programs for pregnant teens so that they complete their education and provide for the best interests of their babies.

Posted by stephen sarbiewski at 12:48 AM