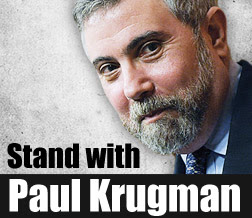 
“Americans need to watch what they say.”
- Ari Fleischer, Bush Press Secretary (after 9/11)Paul Krugman is being targeted by Donald Rumsfeld and the same Neocon McCarthyites that targeted the Dixie Chicks for speaking out – and we need to get his back.
Krugman had the courage to tell the truth on his New York Times blog1:


What happened after 9/11 — and I think even people on the right know this, whether they admit it or not — was deeply shameful. The atrocity should have been a unifying event, but instead it became a wedge issue. Fake heroes like Bernie Kerik, Rudy Giuliani, and, yes, George W. Bush raced to cash in on the horror. And then the attack was used to justify an unrelated war the neocons wanted to fight, for all the wrong reasons.

Paul Krugman was right about our foreign policy after 9/11, and he’s right now. Paul Krugman told the truth about those who manipulated 9/11 for political purposes – but now the professional distorters want him to pay the price.2
ENOUGH. We stand with Paul Krugman – join us if you’ve got Paul’s back too. Because we’re not going back to the days when Bush officials got to tell Americans what they can and can’t say.”

Yes, I'll Sign the letter!
Ari Fleischer telling Americans they need to watch what they say? The same Ari who was still tying together without any evidence 9/11 and Iraq in 2009 when he said this on Hardball? "After September 11th having been hit once how could we take a chance that Saddam might strike again?" Krugman was spot on here. Remember Rudy Guiliani (noun, verb and 9/11) asking for contributions for his 2008 campaign in the sum of $9.11? 70% of Americans believed that Iraq was directly involved with 9/11. The Bush administration was culpable in that belief and they used it to their advantage. George Bush said in a March speech during the buildup to the Iraq war:

"If the world fails to confront the threat posed by the Iraqi regime, refusing to use force, even as a last resort, free nations would assume immense and unacceptable risks. The attacks of September the 11th, 2001, showed what the enemies of America did with four airplanes. We will not wait to see what terrorists or terrorist states could do with weapons of mass destruction."

On the deck of the US aircraft carrier Abraham Lincoln Bush announced the "end of major combat operations" and then directly linked 9/11 and Iraq once again saying:


"The battle of Iraq is one victory in a war on terror that began on September the 11, 2001 -- and still goes on. That terrible morning, 19 evil men -- the shock troops of a hateful ideology -- gave America and the civilized world a glimpse of their ambitions."

"The liberation of Iraq is a crucial advance in the campaign against terror. We've removed an ally of al Qaeda, and cut off a source of terrorist funding. And this much is certain: No terrorist network will gain weapons of mass destruction from the Iraqi regime, because the regime is no more. In these 19 months that changed the world, our actions have been focused and deliberate and proportionate to the offense. We have not forgotten the victims of September the 11th -- the last phone calls, the cold murder of children, the searches in the rubble. With those attacks, the terrorists and their supporters declared war on the United States. And war is what they got."

Sounds to me, like Paul Krugman was completely accurate and the Bush outriders just don't find the taste of their own policies palatable.  The Bush administration brewed a bitter poisonous stew with torture, lies, spying on Americans and pushing a phony war with phony WMD's.  Its no wonder they choke when they get a taste of their own cooking.

Posted by stephen sarbiewski at 6:00 PM