:"I encourage Oklahomans of all faiths to join me this Sunday in offering their prayers for rain," Fallin said. "For the safety of our firefighters and our communities and the well-being of our crops and livestock, this state needs the current drought to come to an end. The power of prayer is a wonderful thing, and I would ask every Oklahoman to look to a greater power this weekend and ask for rain." 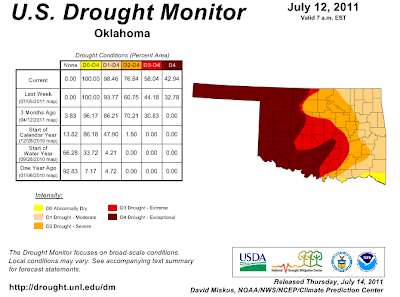 US drought monitor web page
There is no doubt that the western half of Oklahoma is suffering severe drought.  Governor Mary Fallins right wing conservative neighbor Governor Rick (Bush Lite) Perry declared a 3 day prayer proclamation in April for the state of Texas.  You can see the  before and after drought maps and judge for yourself how effective Gov. Perry's Proclamation was in generating rainfall in his state.   Let's hope Gov. Mary Fallin's prayers don't have the same results as Gov. Rick Perry's disastrous communications with unknown deities.  Governor Fallin is one of the Climate deniers like almost every other republican governor.  How can governors like Fallin and Perry dismiss masses of scientific literature confirming global climate change yet at the same time seek the aid of unknown deities for which there is absolutely no evidence whatsoever.  While Perry and Fallin are praying to Zeus for rain the sane citizens of their state are hoping for effective leadership.

Posted by stephen sarbiewski at 11:38 PM