What happens to minorities and the unemployed if we default 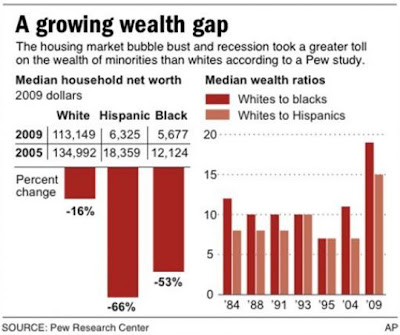 This chart from Pew Research Center shows how devastating the economic collapse was on blacks and Hispanics.  Their losses were catastrophic by any definition.  These findings should be setting off alarm bells in D.C.  They are reminiscent of the Kerner Commission findings.  In 1967 President Lynden B. Johnson created the Kerner commission after riots in Watts, Newark and Chicago.  The most infamous line from the report was widely quoted: "Our nation is moving toward two societies, one black, one white—-separate and unequal."  The Pew results point to the same unequal and seperate results except that one of the societies is composed of  blacks and hispanics.  The republicans are driving relentlessly towards the default cliff.  If the nation does default one of the effects that is postulated is the loss of about 10% of our net worth.   To the unemployed  roughly 14-20 million have very little net worth left.  Studies have shown the unemployed blow through their savings and other assets rather quickly.  Many have already had their homes in foreclosure, what is a 10% loss of almost nothing?  The average black family would lose 560 dollars in a default.  The average Hispanic would lose 632 dollars, peanuts compared to the 12,000 dollars they lost after the wall street speculating crash.  The average white family would lose 13,000.  The middle class has had so many tough breaks over the last decade this is just another smack in the face.  But a family with a million dollar net worth would lose 100,000 and billionaires, might not notice if they lose a million.  The good thing about all of these losses is that finally this country would have some shared sacrifice.  This whole crisis is created and maintained by the republicans.  What this country needs is jobs.  The deficit isn't causing joblessness.  Cutting spending will not create jobs.  The republicans for 2 years talked about how the uncertainty over the health care bill was hurting business and the recovery.  Creating all this uncertainty about the US paying its debt, isn't creating a negative impact on business?   The Republicans say this is about the debt.   Right, this winter when Obama offered to sign "pay as you go" every Republican in the Senate voted against it. This is all about Mitch McConnell's number one priority:


"The single most important thing we want to achieve is for President Obama to be a one-term president."

Posted by stephen sarbiewski at 8:49 PM